A Dog Person from Day One

From as far back as I can remember, I have had a connection to the dog animal world. Raised in the mountains of Spain, I played among our family’s pack of powerful Spain Mastine sheepdogs. Respect for mother nature and the responsibility we have to it was a mainstay in the elders who taught me how to live amongst the canine part of our family. 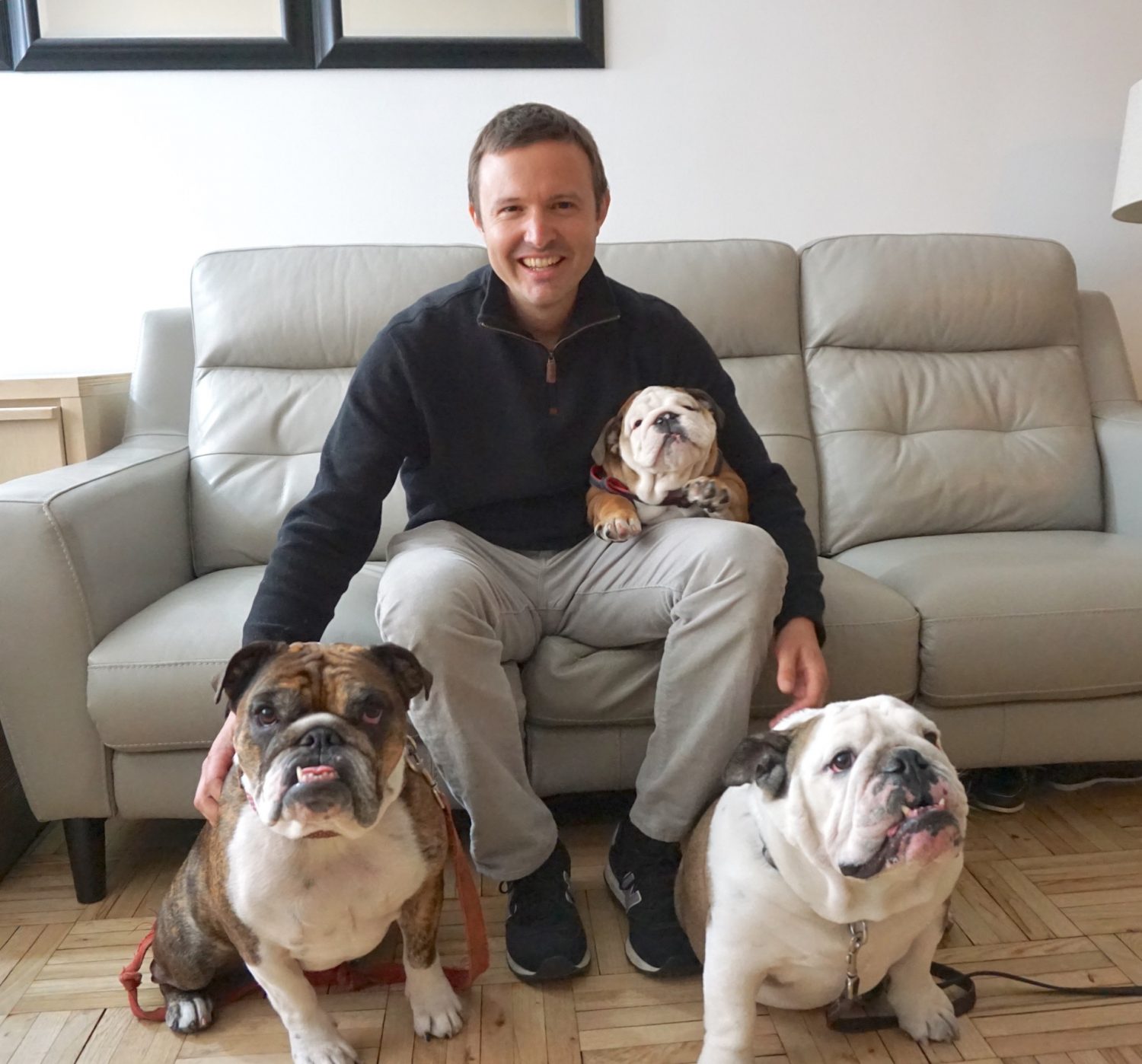 Although I was brought up in this environment, the path that took me to move to the US was completely different. I studied philosophy at UNED in Madrid before I was granted a scholarship to compose and perform music at Berklee College of Music from where I graduated.

After arriving in NYC and successfully pursuing a Jazz career for several years, I injured my left hand and had to stop performing. This was devastating. Watching me struggle, my wife Katie, decided to get a dog for us.

I was soon inspired by our new puppy, Ralphie, who challenged me by not behaving! I threw myself into working with Ralphie on his behavior and became inspired by my new little pal to start a dog training career. I then discovered my innate ability to help dog´s behavior by communicating with body language and energy.

Since I´ve spent a good amount of time and energy developing a new methodology. The goal is to make sure that all dogs are properly understood and that humans learn how to communicate with their dogs effectively.

My story with Dog training starts as a musician. More specifically a professional guitar player, or at least I used to be for over 18 years of my life. As a kid my dream was to come to New York and play music. To live the bohemian life performing and recording music with New York musicians from all over the world. At one point I told this to my parents and surprisingly they were supportive. I also wanted to study music here, in the US,  and that´s extremely expensive, specially if you come from Spain. My parents didn’t have that kind of money.

So I saved money, a lot of money. At least a lot for me. I studied and practiced very hard: 7 to 8 hours a day. EVERY DAY. I applied to several scholarships. I got one in Miami. Then I saved more money and I got another scholarship in Berklee College of Music. I graduated with honors in Jazz performance and composition. Then I moved to New York. I was BROKE. My college degree wasn’t very helpful here. It took me years to manage to survive and live out of the music. I was very proud of it and I was busy performing and recording. But I wanted to thrive not to survive, and I was ready for it. I decided to start focusing on my own project. So I started getting into international Jazz Festivals around Europe and the US. I recorded my second Jazz album and started promoting it. I got fantastic critics and reviews from important Jazz magazines and experts. Things were going pretty well. I felt empowered, but even more importantly I was ready to go for it with full force and commitment.

To achieve this and to come to the US to do music, I made a LOT of sacrifices . I left all my family, friends and a warm land behind me. I even left my girlfriend at that time. And it felt that it was beginning to pay off. I was ready for the next step for the big reward.

At this point, I remember once when I went back to my parent´s house in Spain. One night while I was sitting in the living room, my dad came to me and held my hand. This has never happened to me before. Then he told me: ¨I´m very proud of how far you’ve  come and I know that this is just the beginning. I want you to know that you can achieve whatever you want to achieve. I believe in you.¨ I think this is the first time I saw my dad crying. That really meant the world to me. It was a signal of my success to come, or so I thought.

What happened next is not a success story of glory and fame. It´s actually heartbreaking when I go back in time. A week after my album release and after I had lined up all my upcoming concerts and tours,  I started to develop focal dystonia. This is a condition where you slowly, and without knowing it, you start loosing control of your fingers. Every day no matter how much you practice you get worse. At the beginning you think it´s you. You slowly start to convince yourself that you suck, because you make stupid mistakes that you never made before. Basically you are sending yourself to failure every time you pick up the guitar and there’s noting you can do about it. It´s so intense that your hand without your consent starts rejecting the guitar to a point where you can’t even touch it. The worst part of this condition is that you don’t know you have it. It´s actually cruel.

Reading this hit my soul hard and very intense.I started crying and I couldn’t stop. The emotions that came to me were hard tp put into words. It was the strangest combination of pure sadness, frustration, anger, self pity and tenderness, compassion and beauty at the same time. I wasn’t sure why I was crying, but it was stronger than me and out of my control. I was releasing and letting go a tremendous amount of pent up energy. I guess I realized that this was bigger than myself. In a way I completely surrendered to it. I stopped fighting it.

This process, I learnt a little later from dogs, is called Letting Go. Animals are experts at this and if we are sensitive enough we can learn from this infinite wisdom.

Anyways, after this event my life changed in an unimagined way. I discovered a new thriving and effortless career as a Dog trainer. The way this happened belongs to a different and fascinating chapter in my life. But this also allowed me to become a father and a husband with endlesss joy and gratefulness, which by the way was never in my goals or plans as a bohemian musician. As a musician the word Husband was a blasphemy. Becoming a Father was simply out of reality and irresponsible.

After years and a very different perspective of things the same quote came to my mind. ¨When the gods want to get you, they really know how to strike¨. Now I laugh and  I get it.  I was so tunneled vision, fixated and closed to one side of myself with music that there was no room for anything else. The ¨Gods¨ had no other way to snap me out of it and show me that life is much wider and wiser than your goals, fixations or big rewards. How funny is that the word ¨dogs¨ is the same letters as gods but inverted. Through Dogs I´ve learnt a new and different way of looking at life. They showed me how to live in the present and Let Go of things. I never chose to become a Dog Trainer, it just happened to me because I listened and it became effortless. And by the way, since then I started slowly recovering my hand movements and playing the guitar.

Now, my big reward was not becoming a Dog Trainer or recovering my hand movements or the money that came with it. All these were consequences. The big reward was the process of Letting Go itself which I learnt from dogs.  I FREED up a big load of my back and a tremendous amount of pent up energy that was holding me down.

Learn More About My Story